I got some emails where users of my app ‚Week View‚ were telling me that they had to configure the app according to their preferences again after an update, which is annoying.

From a technical point of view an update is the same as a new installation of an app – it does not „know“ that it already has been installed + every app runns in it’s own sandbox.

So the only possible solution to keep your settings is to save them ’somewhere else‘ and load them again from this store after an update. Exactly this option will be included in the next update. 🙂

Since every windows phone user has a skydrive account associated with his/her windows phone I implemented the option to save settings to skydrive and load them from there again. Additionally it will be possible to reset all app-settings to their default value.

The next update will also contain other new features – here is, how the „Save/Load“ configuration settings page will look like. 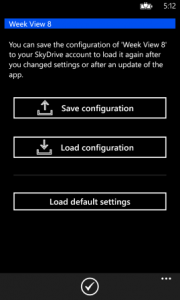 Hope, you did not expect something more „fancy“ here. 😉