At the moment I get many emails from users of my app Week View that creating new appointments does not work. Nothing has changed in the code for creating appointments for a very long time so this was quite unexpected and I tried it out on my phone while attached to development environment and debugger.

I was able to reproduce the problem: When I click on the „add appointment“ command the outlook start screen is shown for about a second. After this the outlook app closes and we are back in Week View. No screen was shown where the user can input appointment data and of course no appointment was created. 🙁 Additionally no exception was thrown, the API call to „Add appointment“ simply returned as if nothing bad has happened.

I knew, creating appointments has been working since…years, nothing has changed in the app but: recently the MS built in calendar war updated.
So maybe this recent update from MS causes this issue?

To test my theory I tried out other calendar apps from the store: Chronos Calendar+, MyCalendar, True Calendar 8, Super Calendar, Simple Calendar, …
All of these apps have the same issue: When you try to create an appointment the outlook start screen is shown for a second, then closed and we are back in the original calendar app.

At this moment I was a frustrated since there is nothing developers can do to fix a problem like this since it is CAUSED BY MICROSOFT and their sh… integration testing. :/
Yeah, I expect to get even more emails from users complaining about this and bad ratings for my app…although it has nothing to do with this problem.

To do another test, I created a simple test app: A windows 10 UPW app that has a button to show the „create appointment“ dialog.
I started it in the development environment on my windows 10 PC.

It was working as expected – on the PC – when the button is clicked, a dialog is shown where the user can enter appointment details.
These newly created appointments also showed up in the built in calendar, as expected and as it should be. 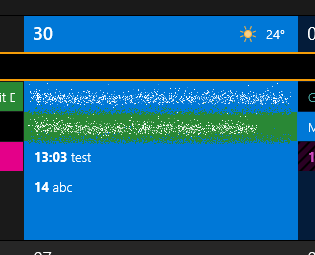 When deploying the same app to my windows 10 phone no dialog for editing appointment data was shown. 🙁
The app showed exactly the same behavior as my Week View app (and all other calendar apps).

The outlook start screen was shown for a second and after this we were „back in the original app“.
I will contact MS and tell them about this issue. Problem is, it’s impossibly to get the „right people“ to tell about the problem.
When posting problems like this to developer forums most time you get some generic replies and sometimes the issue is reported and sometimes in a few weeks or months…maybe the problem gets fixed.