I want to get some experience in creating UWP apps and see how difficult in practice it really is to port an existing app. My app ‚Daily Activities‘ is based on WinRT for windows phone. Initially I was planning to provide it for „Windows on the desktop“ too but this never happened.

Now since the UWP is available and soon will be the base for windows phone apps too (once WP10 is released), I wanted to port my app to the UWP (universal windows platform) and thereby collect experience on „how to do this“ for my other apps. 😉

Btw. I also switched the control suite from Telerik to Syncfusion, which provide the same nice controls for Xamarin Forms too – yes, this is my plan for the future: After porting ‚Daily Activities‘ to UWP I will see, if I can port it to Xamarin Forms and make it available for Android users. 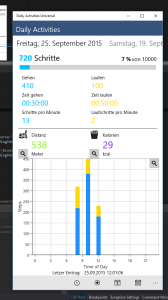 Porting the UI is nearly completed but the screenshot currently only shows some „demo data“. Windows Phone uses the SensorCore SDK to collect steps data but this SDK is no longer available for UWP apps. It was replaced by a common „contextual sensing“ API.

I will have to try this out and see if/how it works on my WP10 test phone…don’t know if it’s supported by Microsofts surface device but hopefully it will be in the upcoming surface 4. 🙂