So if anyone has the store (!) problems described below, you can try the „temporary solution“ suggested by MS support below. If this does not work, please contact MS support and tell them about the problem. Maybe they can give you a refund.

It’s not that I don’t want to help you – there simply IS NO WAY for me to help with this. It’s a problem of the windows phone store and developers cannot fix problems of the store, this must be done by MS. 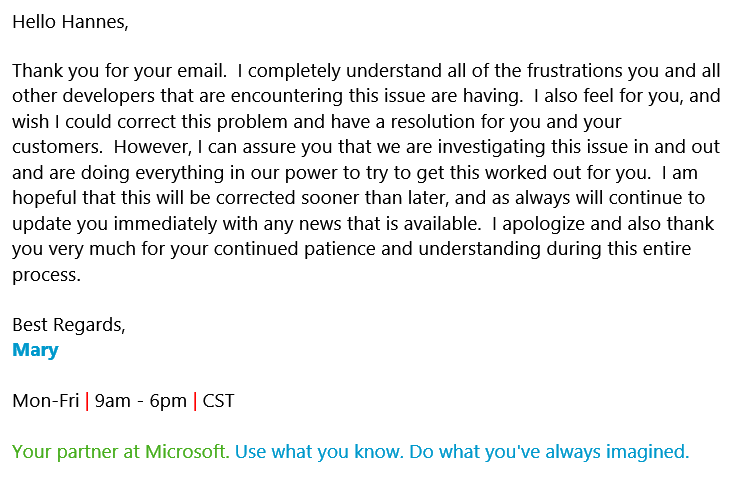 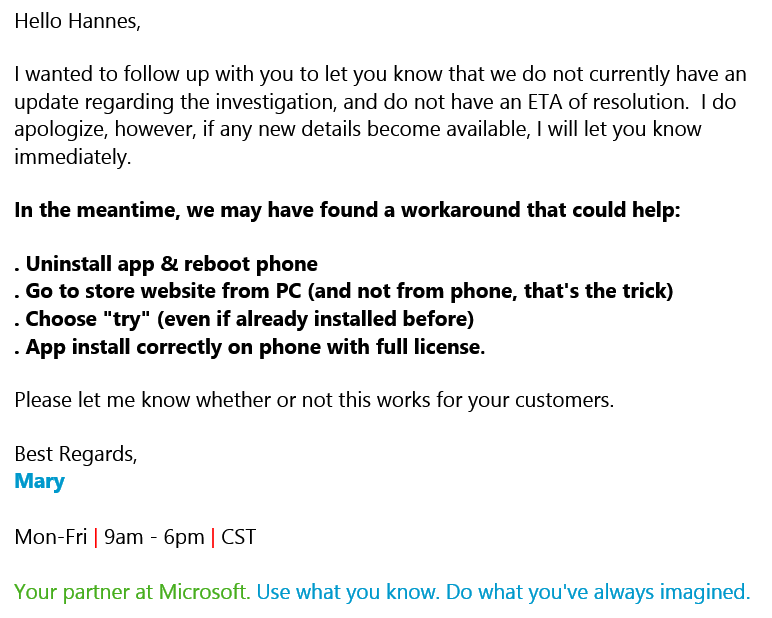 I sent a reply back to Mary:

thank you for your reply!

I understand that it’s not your fault but I am really sad to hear this: No resolution and no plan, when this will be fixed. 🙁

There are some problems with the suggested solution:

– Most users only install apps and updates from their phone and there is no way to communicate this „problem solution“. I will put this on my blog of course (http://www.hannesbiribauer.com) but most users do not read blogs.
They simply give a bad rating for the app because of a problem that has nothing to do with the app. Beside from answering 100 emails per day (in my spare time) and replying to bad marketplace ratings and hope that users will change it there is nothing I can do about this. My app „Week View“ is one of the top 5 apps in some countries and it has been at this place for some time.
I guess it will no longer be there after all these bad marketplace ratings.

– Some users already tried your suggested „solution“. They removed the current installation of the app from their phone and re-installed the trial version from the store website on a PC. But now they have a trial (!) version installed on their phone!

It’s in German, the first entry says that a user removed the app and reinstalled the trial version. That was working but not he HAS the trial version which of course is not what he wanted. Maybe it’s because he initially got the app as part of a promotion but I don’t think so and even if it is the way, it is still wrong.

It really, really seems that as part of the marketplace migration/preparation to create a common marketplace for windows and windows 10 in the future, the licenses of some users got „lost“ or were not migrated successfully.

As said, I will post your suggested solution on my blog and ask users of my app to try it and give you feedback, if it worked.

Another issue: Some users even re-purchased my app and paid twice since they like the app and the marketplace told them they have not purchased it yet. (which is wrong) What will happen when I release an update of my app?
Will these users have to pay a third time or will they „keep“ the license?

Please also communicate to all other MS support members that this is a STORE problem which cannot be solved by developers.
At the moment some support people are still telling customers that they should contact developers (!) to solve a store problem, please see: http://answers.microsoft.com/de-de/winphone/forum/wp8-wpapps/store-fehler-80004005/1a2b262b-ce9d-4bda-86e3-1c0c8bc535d3?page=6&tm=1426754089175
(in the middle of the page, the picture with the twitter postings)

I am an enthusiastic supporter of the windows phone platform and have done development for it since I got my first pre-release windows phone 7 device and before that I created apps for windows mobile 6.5. I want the platform to succeed and am looking forward to windows phone 10 (which I am already testing on one of my developer phones).

I hope you understandable that problems like this are so frustrating for developers that they really reconsider if developing for the windows platform was the right choice.

As said I know that this is not your (personal) fault but please be so kind to comunicate the issue to other MS support member to not make developers responsible for a store problem and please keep working on this problem to fix it as soon as possible.

I will send you data from users that tried the suggested solution and if it was successful or not.
Please inform me as soon as any progress is made according to a fix of this issue or if you need any information that can help to solve this issue.

Soo…I do not know if this will work but maybe you want to try it and follow the advice from MS support. What can/may happen: You end up with the trial version on your phone. 🙁

Currently I am waiting for some brave users from PocketPC.ch forum to tell me if this „solution“ was working on their phone. Btw. I cannot test it on my phones since I never had this problem and so am not able to test anything according to it.

Of course I will post an update on my blog as soon as I have some verified data from users who were brave enough to test this.

The final solution may be to contact MS support. If they tell you that it’s the developers fault tell them that it’s not and ask for a refund…and of course re-purchase the app, if you like it. 😉 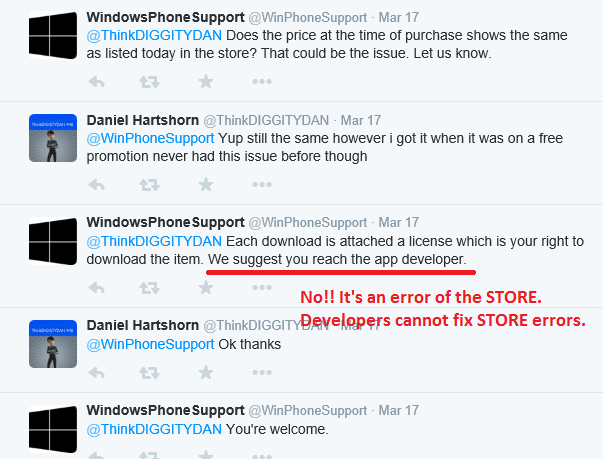 …meanwhile I was able to get a confidential shot from MS headquater: 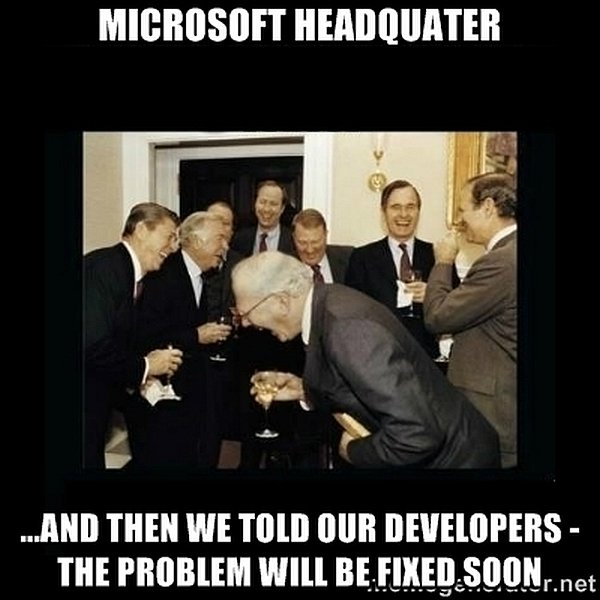 16/03/2015 – Update 4: I got a reply from MS Support and sent them an answer. Since many windows phone related forums are reporting this issue I hope this creates some pressure on MS to find and fix the problem soon.

Some forums/threads, related to this issue:

I will update my blog as soon as new information arrives.

Update 3: no reply from MS Support so far…have been answering about 200 EMails from users asking me about this issue today. This is quite sad and confusing for me – people giving bad ratings for my app for a problem that has nothing to do with the app but the STORE.. 🙁 🙁

Update 2: I have replied to the email from MS Support.
I listed 11 „sample cases“ that have been sent to me from users of my app (from more then 200), thanks for that! In most cases it seems that the problem occurs when users installed the app as part of a free promotion but there are also cases where users regularly purchased the app and MS store asked them to pay again!
(You should never have to pay again for an app you purchased once)

I will post an update as soon as I get a reply from MS support.

Update 1: I got a reply from MS Support.
They are asking me for data from users where this problem occurs.
It does not occur on my phone, but it would be great, if you contact me and tell me the data which is required by MS Support:

Thanks for your help!

I already sent the reply to MS support with data from users that are concerned by this issue. I am no longer „collecting“ support cases.

Yesterday I released an update for Week View, as written below.

It contains some bugfixes and I was hoping that a release of an upate also solves the „Error 800040052“ marketplace (!) problem.

Unfortunately this was not the case – it seems that things got worse. 🙁

Update: Meanwhile there is a thread for this in the WPDev Feedback forum, please see: https://wpdev.uservoice.com/forums/110705-dev-platform/suggestions/7168298-provide-fix-for-c101a7d1-when-updating-80004005-w

Many apps are concerned and at the moment not reply from MS.

At the moment I am getting many emails from users of my app that they cannot perform an update.

Since this problem has nothing to do with the app and is absolutely out of my control, I can only hope for MS to fix it. 🙁

Btw. other apps have the same problem and MS support is not very helpful.

If you need a quick workaround, your best bet is to contact Microsoft support for Windows Phone and see if they can help you reinstall your app.  They may tell you the developers broke something in the app. Try to get them past that. The app is in your purchase history and you’re entitled to install a copy.  If they tell you the app license/skus/whatever has changed, politely tell them they’re wrong. The app id was not changed since 2012 and you’ve been able to install updates just fine until now.  If they offer a rebuy/refund option that works for you and doesn’t preclude you from reinstalling the app later, that might be a good outcome for you.

Beside from my blog, you can also check this threads:

I will contact MS support and tell them about the problem.