The title may sound dramatic but that’s what happened, maybe with the last „unification“ of the windows phone store and the windows store, maybe when preparing the store for windows 10.

1. Submitting updates for existings apps is not possible

Today I wanted to submit an update of my app Daily activities, fixing a bug that was reported by some users: Showing activity data sometimes causes an error…and I found out that the shown data is not always correct.

So I fixed all these issues and wanted to submit an update today.
But: This does not work at the moment. 🙁

To submit an update, a package for the store must be created inside Visual Studio, which leads to this problem: 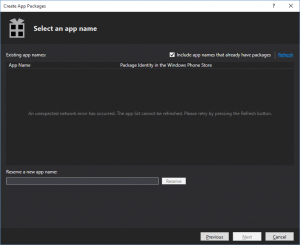 The problem is also described in StackOverflow: https://stackoverflow.com/questions/31279254/unable-to-publish-windows-phone-8-1-application-from-visual-studio-2013-express

Unfortunately it is not fixed as stated in the thread above.
So at the moment I and possible many other app developers are not able to submit updates  for their apps. 🙁

2. Unpublishing or deleting apps is not possible

In some developer forum threads I read that the issue (1) may be caused when a developer has „too many“ apps registered in his accout.

Punishing a developer for having many apps makes no sense…but I wanted to try out if removing some registered app names for which I never submitted apps (about 5) may solve the problem so I tried to delete app submissions.

This was very simple in the old dashboard but I did not find an option for it in the new dashboard…after some research I found out you have to go to your app submissions and remove them so that’s what I did. 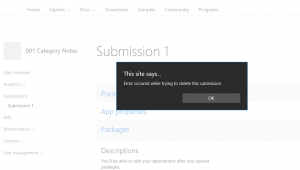 Unfortunatelly this is not working too. 🙁
(I tried it with different app submissions)

I really hope MS will fix these issues soon, as always I also created a thread for it in a developer forum.

MS is not doing that great in the last days and I really hope things will get better once Windows 10 is released and support has time to care about issues like this.